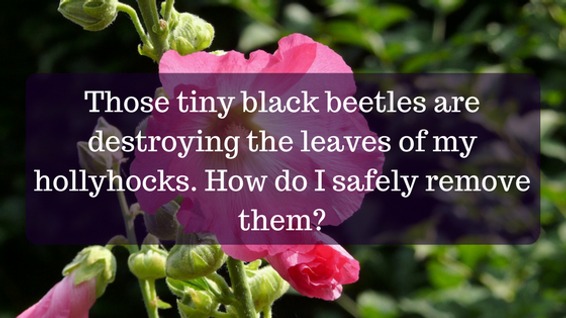 It can be difficult to make a diagnosis sight unseen, but from your description and the time of year, it sounds like those black beetles could be hollyhock weevils. These natives of Europe are now pretty common throughout the state wherever hollyhocks are grown. 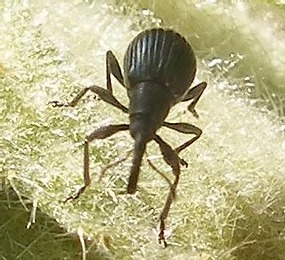 Hollyhock weevils overwinter under the soil around the flowers and emerge in the spring time when they start to chew on the tender new growth. You’ll notice the leaves of your hollyhock covered in tiny holes, like swiss cheese. Once the flower buds appear, the females use their long snouts to chew into the buds and lay their eggs inside. The flowers will still open like normal, but the larvae will stay in the seed pod until it emerges as an adult in the summer or fall to start the cycle all over.

Most of the damage hollyhock weevils do is cosmetic, but in larger numbers they can disrupt the life cycle of your hollyhocks, which tend to be short lived perennials anyway. The good news is, there’s a lot of different control options. The weevils should be pretty visible on the plant now, so you can shake them off the hollyhocks into a bucket of soapy water. Or use an insecticidal soap to spray them directly. They tend to be most active at night, so go out in the evening with a flashlight for the best results.

Most any insecticide that targets chewing insects will also help control hollyhock weevils. For an organic insecticide with a little longer residual, try Neem Oil. Made from the clarified extract of the Neem tree, Neem oil is a natural insecticide and fungicide that controls and repels insects, including weevils up to two weeks.

It’s early enough in the season that you should be able to get most of the adults before they can lay their eggs. But once you start to see the seed pods in the fall, you should get rid of them. Of course, you’ll miss out on the new hollyhock seeds, but you’ll get rid of the weevil larvae inside.