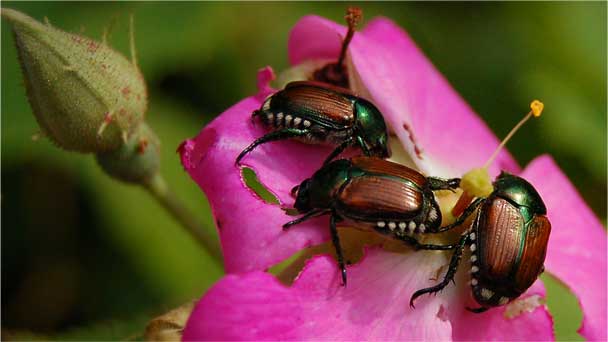 This was a question from way back in 2014 about controlling Japanese Beetles with organic methods. There have been some exciting developments and new products since then, so we’ve updated this post for 2020! 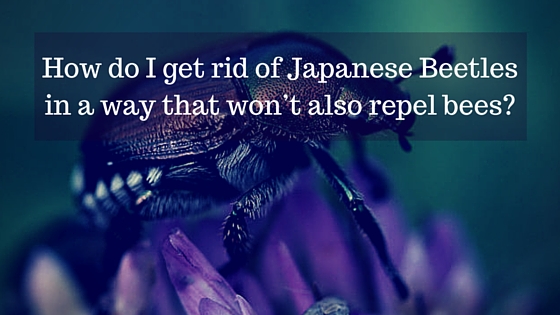 Question: Eeek! I just found several Japanese Beetles on roses and evening primrose plants. I’ve done some reading but there are so many suggestions! What really works? (that won’t kill bees?) Is there any hope if the neighbors don’t treat too? I knocked off as many as I could but have read such horror stories. What’s true in Colorado? – Anne
Anne, Eeek is right! Japanese Beetles are some of the most significant garden pests in the country. They actually are Japanese natives and accidentally sneaked into the country in the early 20th century. Since then, they’ve spread throughout North America becoming serious pests. The good news is there are a lot of control options available. As with most garden pests, it helps to learn a little bit about the Japanese Beetle’s life cycle in order to determine the best course of action. 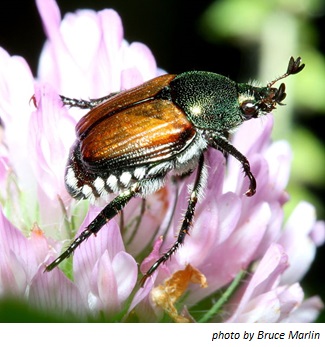 Adult Japanese Beetles start to emerge from the soil in June through July, and immediately start to feed. Female beetles release a pheromone to attract males. After mating, the female burrows a few inches into the soil and lays a small group of eggs, and returns to the surface to feed. This cycle of feeding and laying eggs continues until the female lays 40 – 60 eggs during her 4 to 8 week lifespan. After a couple of weeks, the eggs hatch and the larvae begin to feed on plant roots and other organic material. They will feed until cool weather drives them deep into the soil, where they remain dormant during the winter. When the weather begins to warm in the spring, the larvae begin to move to the surface, eventually emerging as adults again in the heat of the summer. 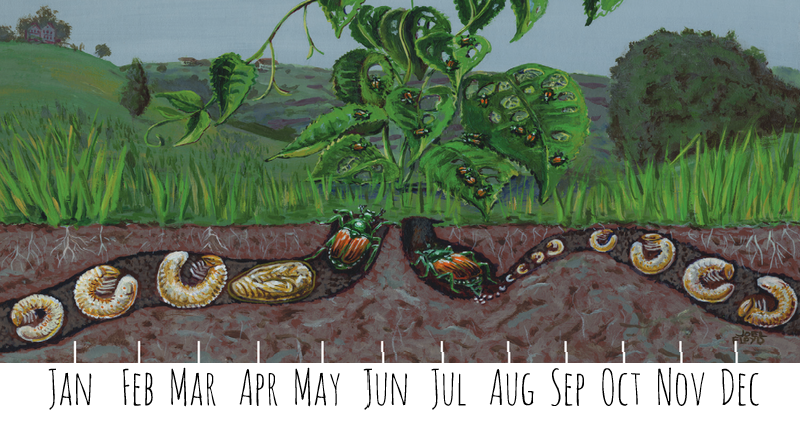 Japanese Beetles damage plants as both adults and larvae. Adults feed on soft leaf tissue, leaving skeletonized foliage. Larvae feed on roots, especially turf grass, leaving dead, brown patches in the lawn. Complete control depends on addressing both the larvae and the adult bugs. Adult Control Hand picking Japanese beetles can be effective on small outbreaks, if it’s done early. By catching the first emerging adults, you can prevent them from attracting more beetles to your yard. Wear gloves and shake the beetles out of the branches into a bucket of soapy water. 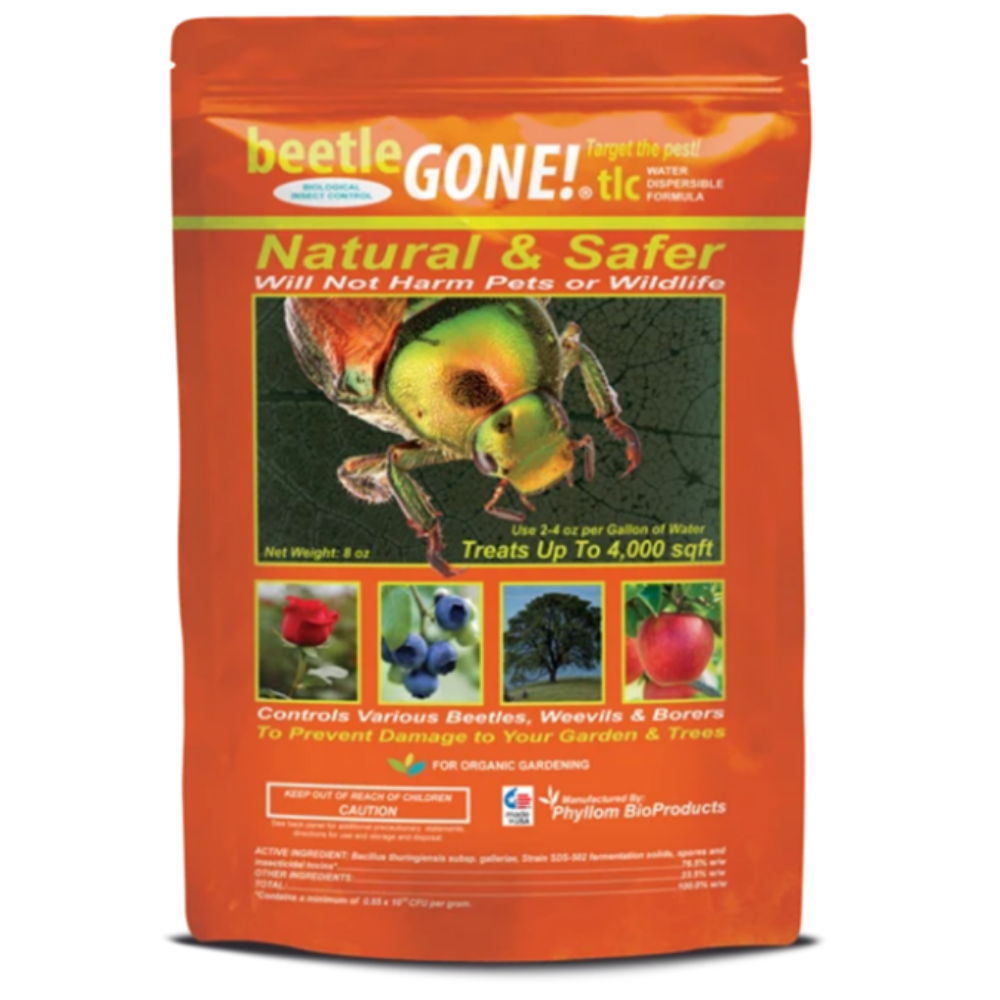 For larger outbreaks, one of the best organic treatments available today is beetleGONE! by Phyllom BioProducts. BeetleGONE! is a brand new strain of BT bacteria that is powerful enough to control both adult and larva stage of susceptible beetles, yet it demonstrated no adverse risks to non-targets tested such as bees, wasps, ladybugs, fish or birds. You can use it on trees, shrubs, edible fruits and vegetables up to the day of application. Other natural and organic insecticides like Neem Oil and Insecticidal Soap can also be effective on adult beetles. 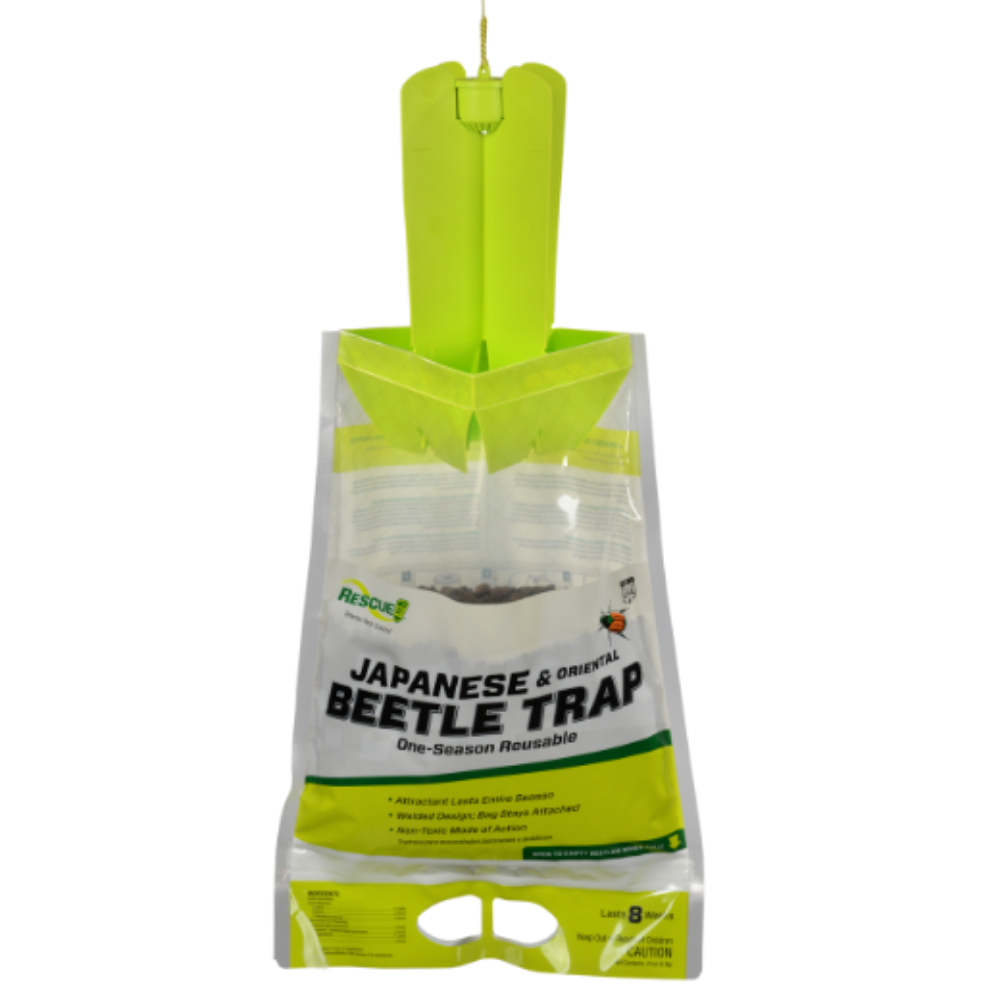 You can also use beetle traps to control the adult beetle population. Some people worry that traps will attract more beetles to they yard, but they can be used to help direct and deter beetles from your prized roses. Traps should be placed at least 30 feet from ornamental plants, to lure beetles away from the area where they are creating damage. Grub Control 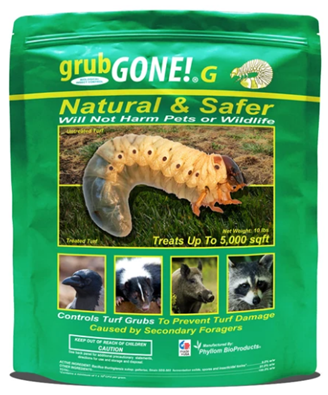 Grub controls are best applied when the grubs are small and feeding near the surface. A good rule of thumb is to apply on April 1st, July 1st and September 1st.
For biological control of Japanese Beetle grubs in the lawn, there’s nothing better than Phyllom’s grubGONE! Similar to beetleGONE!, grubGONE! is a new strain of BT bacteria specially formulated for lawn applications. It’s easy to use and safe for the environment, kids and pets.Cultural Controls As always, maintaining healthy and strong plants will help control pests. A thick, healthy lawn will be better able to resist Japanese beetle larvae, so be sure to mow, water and feed your lawn regularly. Keep your flowers, trees and shrubs well pruned and watered throughout the season, too. While there are no guaranteed “Japanese Beetle Resistant Plants” (just as there are no “Deer Resistant” or “Rabbit Resistant” plants), there are some plants and flowers upon which Japanese Beetles rarely feed. Mixing some into your garden can help deter and control big beetle invasions.