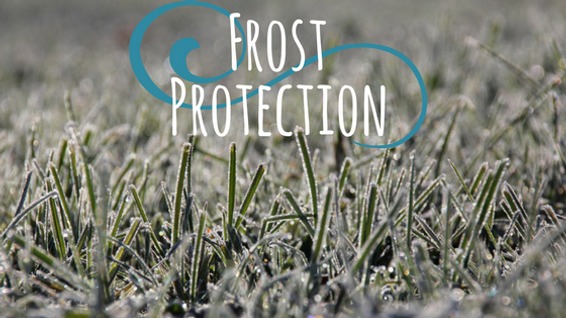 In the fall or early spring, temperatures can plummet without warning. Chalk it up to living in Colorado. But with a little preparation, you can protect your tender plants against frost and extend your growing season by several weeks

A light frost is when the temperature dips below 32° at some point during the night. A light frost causes moisture in the air to freeze before becoming dew, creating a delicate blanket of frost in the morning. New growth or tender leaves can be damaged by a light frost, but most plants can survive with a little protection.

A hard frost, or hard freeze, on the other hand is a period of four or more hours during which the air temperature is lower than 25°. While most plants can survive a light frost, very few can withstand a hard freeze. Once the first hard freeze hits, it usually means winter has arrived and the growing season is over.

During the fall and early spring, it’s always a good idea to keep a close eye on the local news and be aware of changes in the weather. When the weatherman says frost is predicted, the Old Farmer’s Almanac suggests asking yourself these questions.

1. How warm was it during the day? If it’s been a hot, dry fall day with temperatures in the 70s or 80s, the chances that the air will get cold enough to freeze during the night are pretty slim.

2. Is it windy? Wind can have a significant effect on frost. On a still night, cold air can brood over the garden all night long. But a little steady breeze in the air can keep things circulating and mix up the warm and cold air, making frost less likely. But if the breeze turns into a stiff, cold wind it will sweep all the warm air out of the garden and you’ll likely see a frost that night.

3. Is it cloudy? Clouds help to stop warm air from dissipating into the atmosphere, so a cloudy night means there’s a lesser chance of frost.

4. What is the dew point? As the temperature drops during the night, the air holds less and less water vapor. When the air reaches a temperature at which it can’t hold any more moisture, we call that the dew point. At the dew point, water vapor begins to condense and form dew. As the water condenses, it releases heat which warms the surrounding air. So, the more moisture in the air, the less chance of frost there is. This is why farmers will often water their crops during a cold snap, to create a humid atmosphere to stave off the frost. The Almanac suggests that as a rule of thumb, “don’t worry about a frost if the dew point is above 45 degrees on the evening weather report.”

5. How is your garden situated? As we all know, hot air rises, so gardens on slopes or hills usually get less frost while gardens in valleys or hollows, where cold air tends to pool, are at greater risk. It’s not uncommon for people living at the bottom of a hill to get a significant frost, while their neighbors up top don’t get any.

Protecting against a frost If it seems a frost is coming, cover any tender plants or veggies to insulate them. You can use frost blankets, burlap, cloth or old towels and bed sheets. We don’t recommend using plastic because it doesn’t breathe and traps moisture which can freeze. Use a stick or old hula hoop to keep the fabric off the plants. If you only have a handful of plants you want to cover, turned-over plastic buckets make great individual covers. To retain the most heat around your plants, it’s best to have everything covered before sundown.