In February, we wait with bated breath as the famous groundhog emerges from his burrow and looks for his shadow, thus predicting the weather for the next three months. How did this strange series of events come to pass? Well, this most quirky of American holidays has a surprisingly long lineage. Read on to learn more about this wacky winter festival and impress all your friends at the office Groundhog Day party! 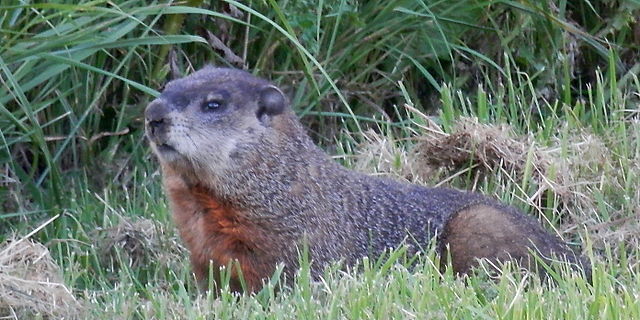 The Groundhog So, what is a groundhog anyway? The groundhog, Marmota monax, is a member of the squirrel family that lives throughout the northeastern and central United States. Groundhogs are known by various names including groundpig, whistler, marmot and woodchuck. Groundhogs are excellent burrowers, tunneling underground to sleep, raise their young and hibernate during the winter. According to legend, on February 2nd the groundhog emerges from his hibernation burrow to take stock of the world. If he looks around and sees his shadow on the ground, he goes back to bed which means there will be six more weeks of winter. If the day is cloudy and he casts no shadow, it means an early spring.History Groundhog Day began as a tradition among the German-speaking Amish and Mennonite people of Pennsylvania. The holiday was first celebrated in the 1800s, but it’s roots stretch deep into the history of pagan Europe. In the Middle Ages, it was bears who were thought to be nature’s weathermen. In late January to early February, medieval people of Germany and Scandinavia celebrated the bears ending hibernation, which signaled the imminent arrival of spring. Over the centuries, this practice of weather prognostication became associated with the Christian feast day of Candlemas, which falls on February 2nd. According to an old English poem
If Candlemas be fair and bright,
Winter has another flight.
If Candlemas brings clouds and rain,
Winter will not come again.

Punxsutawney Phil Today, Groundhog Day is celebrated throughout Canada and the U.S. There are dozens of furry forecasters plying their trade throughout the land, but the most beloved groundhog in America lives in a small Pennsylvania town called Punxsutawney. Punxsutawney hosts the country’s largest Groundhog’s day celebration, attracting upwards of 20,000 visitors each year. At the center of the celebration is the legendary Punxsutawney Phil. Phil is attended by his coterie of top-hated courtiers known as the Inner Circle. Each year on February 2nd, Phil emerges from his burrow on Gobbler’s Knob at precisely 7:29 am to deliver his annual announcement. The other 364 days of the year he lives a quiet life in the Punxsutawney Public Library. Phil gained international fame when he stared with Bill Murray in the surprisingly philosophical comedy, Groundhog Day. In the movie, Murray plays an arrogant weatherman who finds himself stuck living the same day over and over again. Phil plays a groundhog.Accuracy So, how accurate are Phil and his fellow hirsute haruspices at actually predicting the weather? While his ever-loyal Inner Circle proclaims Phil is accurate “100% of the time,” the actual numbers tell a different story. According to stormfax.com, a weather almanac site, Phil’s predictions have been right about 39% of the time. Which, for a rodent, is not too bad!