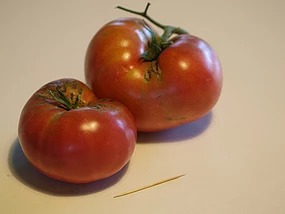 This fantastic heirloom tomato was developed in the early 1930s by an amateur gardener named Marshall Cletis Byles, better known as “Radiator Charlie.” Byles was an auto mechanic by trade and owned a small garage located at the foot of an imposing mountain in the town of Logan, West Virginia. The mountain was so steep that local truckers were constantly overheating as they crossed from one side to the other. But if the mountain was hell for the truckers, it was a godsend for Byles who earned a steady stream of radiator repair jobs and a jaunty nickname to boot. 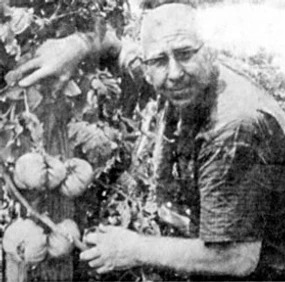 But a steep mountain pass could not slow the Great Depression that was roaring through the country. Hit hard by the economic downturn, Byles began to look for other ways to make ends meet. Despite having no formal training in cross-pollination, Charlie set out to produce the biggest tomatoes West Virginia had ever seen. He planted four of the largest tomato varieties he could find and began painstakingly hand pollinating them. Finally, after 6 years of trial and error, Charlie knew he had something special.

In the early 1940s, he began selling his tomato plants for $1 apiece, almost $17 in today’s money. Despite the hefty price tag, Radiator Charlie’s tomatoes were a huge hit. Some people drove hundreds of miles braving the treacherous mountain pass for a chance to get Charlie’s tomatoes. After 6 years of selling his tomatoes, Charlie was able to pay off his $6,000 house mortgage. And just like that, the “Mortgage Lifter” was born.

Mortgage Lifters haven’t changed at all since Charlie’s day. They still produce big, tasty beefsteaks that average up to a pound in weight. In our 2016 Tomato and Pepper Trials, we found Mortgage Lifters to be the earliest and most productive heirloom tomatoes. Their rich, sweet taste is perfect for slicing, salads, sauces and canning.