When it comes to weeds in the garden, most of us just want to know when they’ll be gone. But they say "know thy enemy" for a reason. Learning a little bit about the weeds in your garden will help you make better choices on how to control them. This will result in longer lasting and safer control. It may also give you a certain begrudging respect for these persistent little buggers!
A Note on Weed Killers Here at O’Toole’s, we carry all kinds ofweed control products. The selection can be a little overwhelming, but all of these products can be both safe and effective when used correctly. So, here’s a brief overview to help you figure out which one to choose. We generally break down weed controls into three categories – pre-emergent, selective and non-selective.Pre-Emergent Pre-emergents inhibit seeds from germinating, preventing new weeds from sprouting. They are typically used in lawns or around established perennials, trees and shrubs in the early spring. Pre-emergents will stop all seeds from sprouting, so don’t use it in the veggie garden, on a lawn your planning to re-seed or anywhere you might want to plant seeds. Pre-emergents include synthetic products like Bonide Weed Beater and Bayer SeasonLong and organic, corn-based products like Heathy Grow Corn Gluten.Selective Selective weed killers kill broadleaf weeds that are actively growing, but they won’t harm grasses. This makes them perfect to control weeds that are growing in the lawn area. Selective weed killers include 2, 4-D based products like Bayer SeasonLong and iron-based organics like Natria Lawn Weed Control.Non-Selective Non-Selective weed killers tend to be the strongest weed control products. They will kill any plant they come in contact with, so they should be used with extra caution. Non-selective weed killers are best used in rock or bark areas, on sidewalks or driveways or around foundations. Non-selectives can be glysophate-based synthetics like Kleen-Up or herbicidal soap type products like Natria Grass and Weed Killer.

*With any weed control products always, always, always read and follow all the directions carefully. If you have any questions about what you should use, stop by the store and we’ll be happy to help you pick out just what you need!

Here are some of the most common weeds we’ve been getting questions about this month, along with some suggestions on how to get rid of them for good. 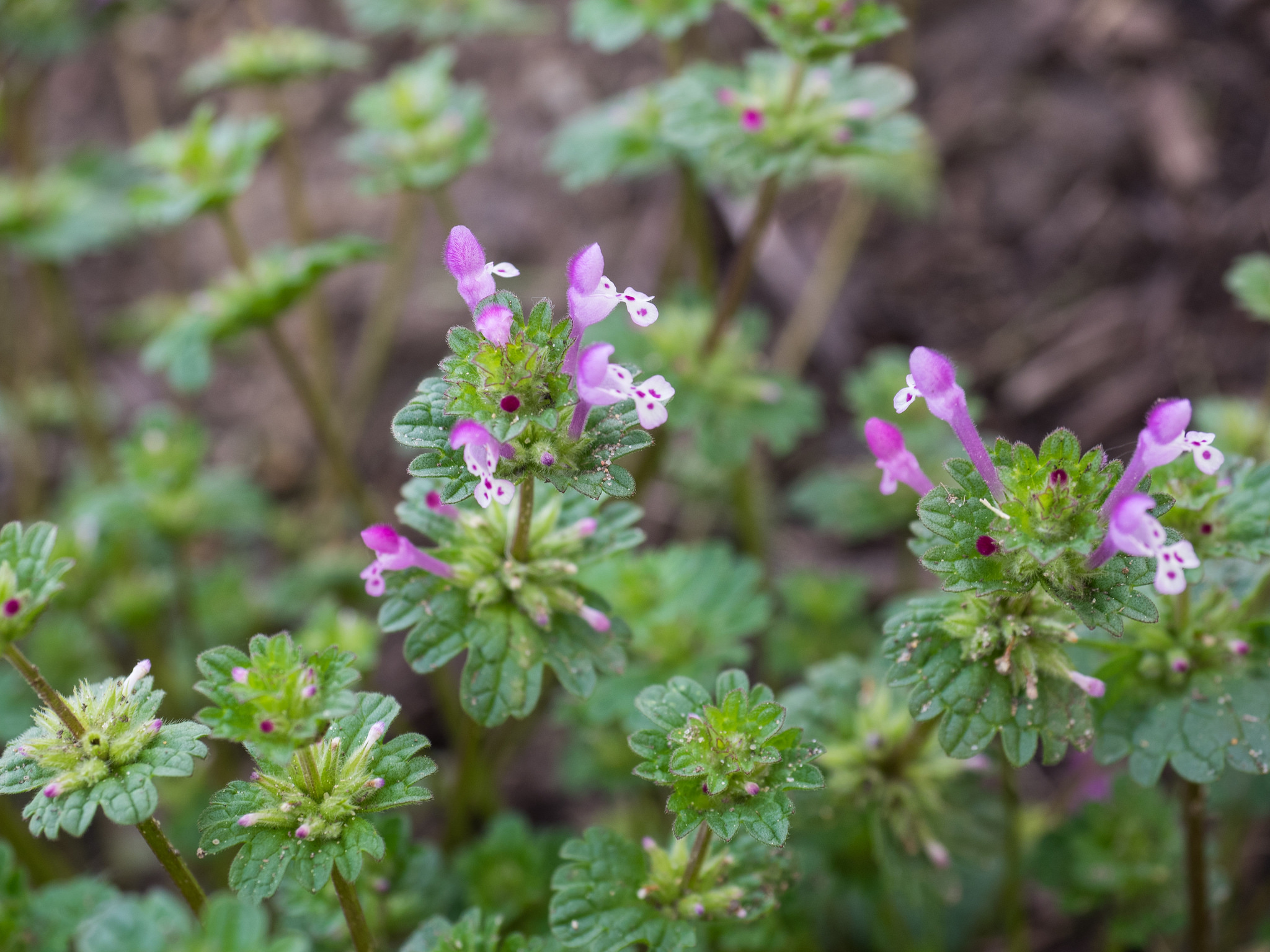 HenbitLamium amplexicaule
DescriptionIt’s easy to ID this annual weed by its little, purple flowers. Henbit also has distinctive leaves that attach directly to its purplish, square-shaped stem. This weed got its common name when people observed chickens snacking on it in the barnyard. In fact, henbit is a member of the mint family and is edible for people, too. Some gardeners even harvest it and use it as an herb.Growth HabitHenbit is a winter annual. With the slightest warm up in the spring, henbit seeds are ready to sprout. They grow and bloom during the early spring, drop their seeds and die off by the early summer. ControlSince Henbit propagates mostly from seed, it can be effectively be controlled with a pre-emergent weed killer. Henbit plants that are already growing can be dug up, hand pulled or treated with a selective or non-selective weed killer. 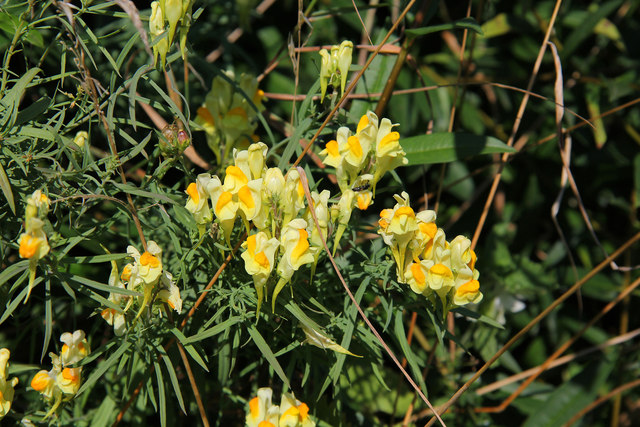 Toadflax Linaria vulgaris
DescriptionToadflax proves the adage that “A weed is just a flower growing in the wrong place.” It was originally brought over from Europe as a perennial bedding plant, but it quickly escaped the garden and is now considered an invasive weed. Toadflax blooms with upright sprays of yellow and white flowers, somewhat similar to snapdragons, which accounts for one of it’s other common names, Butter and Eggs. Growth HabitToadflax is a perennial that reproduces fast and prolifically – which is what makes it so noxious. It not only drops seeds, but also propagates along its extensive system of creeping rhizomes.ControlSince Toadflax is a perennial and comes back from the root, pre-emergents are generally not effective. And because of it’s extensive root system and rhizomes, it’s not so easy to pull by hand, either. For toadflax, the best thing to use would be a selective or non-selective product to kill the entire plant down to the root. 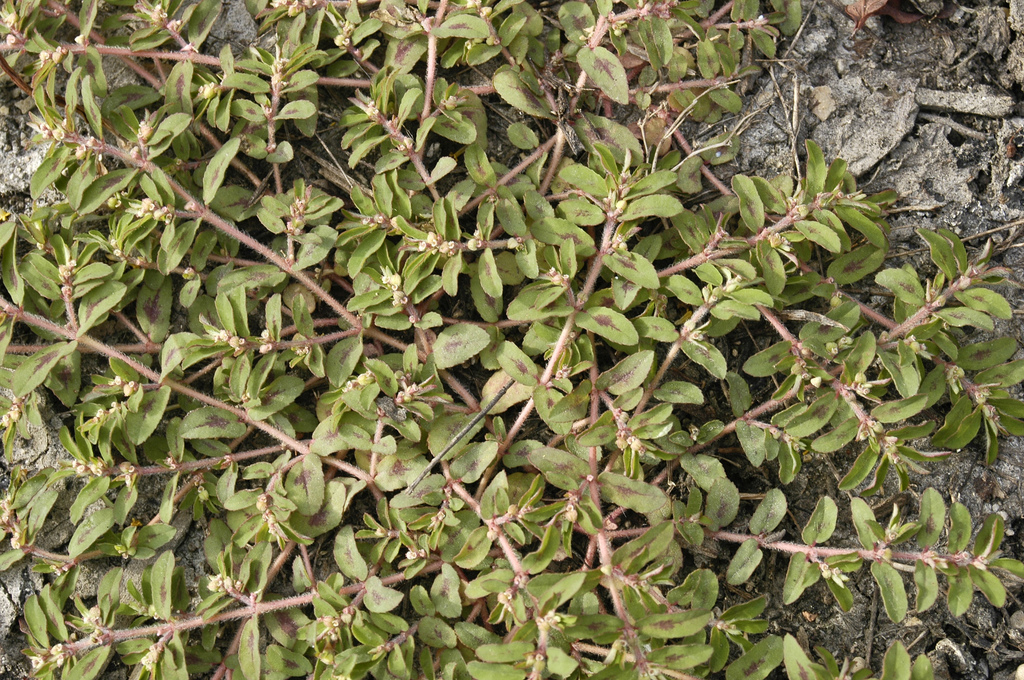 Spotted SpurgeEuphorbia maculate
Description Spotted Spurge is creepy – literally! Its stems creep along the ground and form a dense mats up to 18 inches long. Spotted spurge can be distinguished from other members of the spurge family by the little black splotches on the leaves – hence the common name “spotted.” Growth Habit Spotted spurge is another annual weed that spreads by seed. Seeds dropped in the summer start to sprout as soon as the weather warms up in the spring.Control Propagated mostly by seed, spotted spurge can be controlled by pre-emergents. Once it’s sprouted, its flat shape and single tap root make it a good candidate for hand pulling – especially after a spring rain or snow storm. It can be controlled by most selective or non-selective weed killers, too. 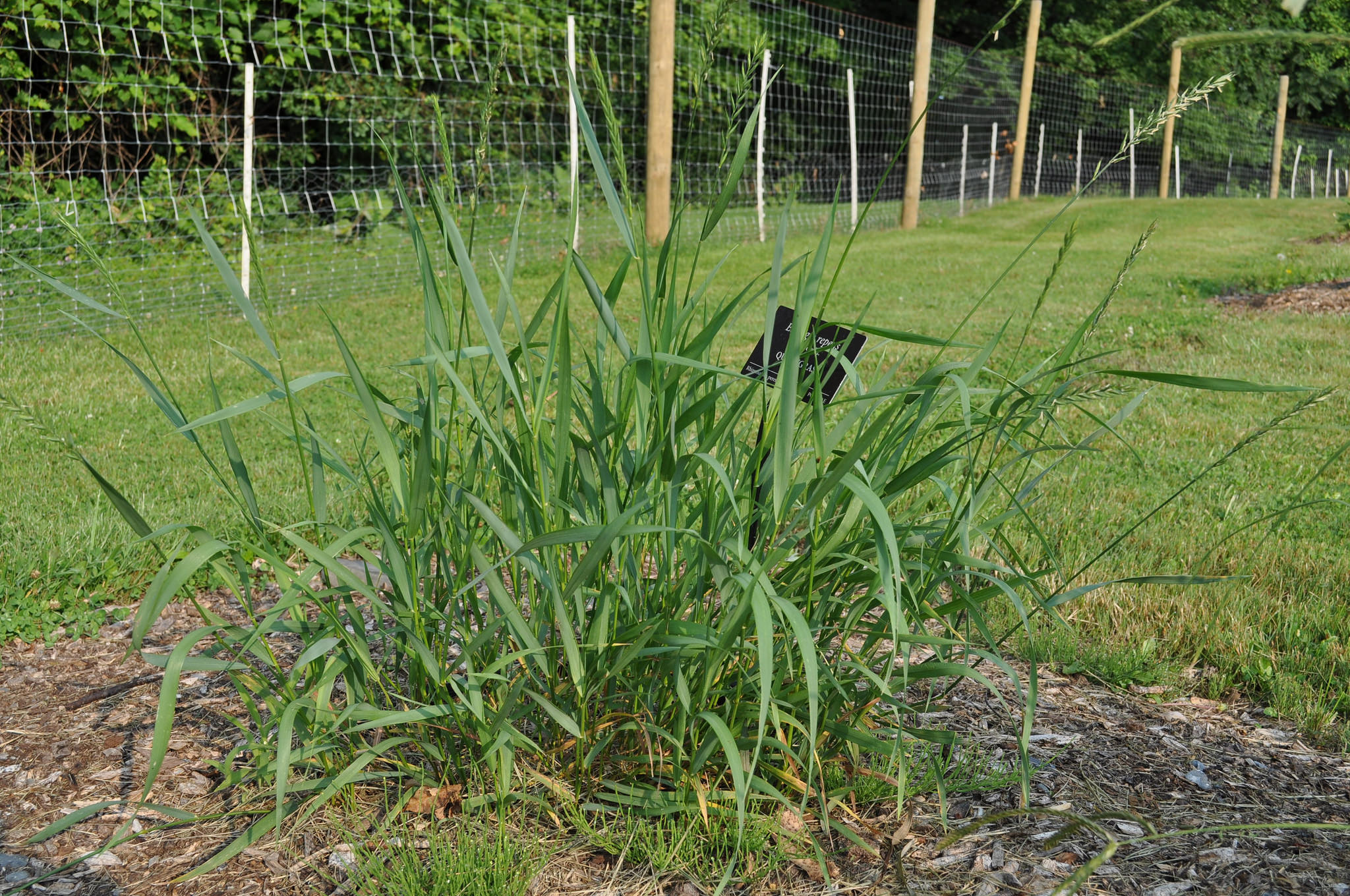 QuackgrassAgropyron repens
Description CRABgrass or QUACKgrass? It’s a common question. Even though both grasses look very much alike, they’re actually totally different plants. The best way to identify if you have crabgrass or quackgrass is by looking at the calendar. Crabgrass is a warm season annual grass, so it generally doesn’t show up until later in the season (around the end of May into June). Quackgrass is a cold season perennial, so it will start to pop up in the early spring. Growth Habit Quackgrass is a perennial weed grass that grows from a large underground root system and propagates along an extensive network of rhizomes. Control Another difference between the two grasses is that crabgrass is fairly easy to control, while quackgrass is, unfortunately, not. It’s complex networks of roots and rhizomes makes hand pulling difficult. Probably the best bet with quackgrass is a strong, non-selective weed killer. If you have quackgrass in the lawn, we still recommend using non-selective weed killer to spot treat it. It will kill a small dead spot on the lawn, so only spray sparingly right on the weeds. But dead spots can be re-seeded and are a small price to pay for a quackgrass free lawn. 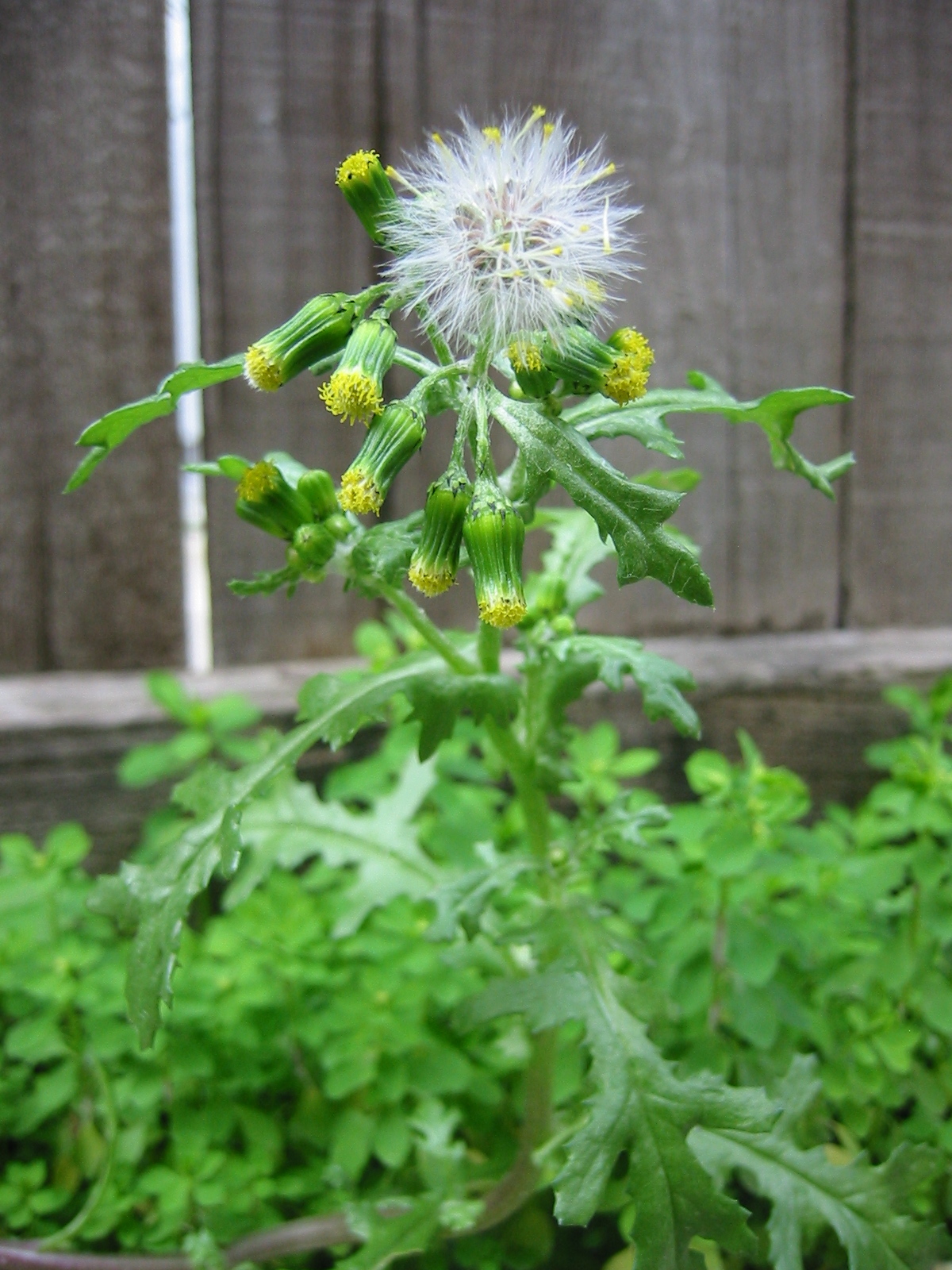 Groundsel
Senecio vulgaris
Description Groundsel Is what’s known as a ruderal species. The name comes from the latins rudus meaning “rubble.” Ruderal species colonize distressed land. The distress can come from a nature, like the aftermath of a wildfire or landslide, or human activity, like roadsides or tilled fields. Also called Old-Man-In-The-Spring, groundsel produces small yellow flowers that eventually turn into dandelion-like white, fluffy seed heads. Growth Groundsel is a winter annual that sprouts and grows during the winter and blooms in the early spring. It produces puffballs of light, feathery seeds that are blown all around by the wind.Control Another annual weed that can be preempted by pre-emergent weed control in the early season. Sprouted groundsel can be hand-pulled or sprayed with either a selective or non-selective weed killer. The real key is to prevent it from going to seed. A single groundsel plant can produce something like 20,000 seeds during its life. You don’t want those blowing around the garden!