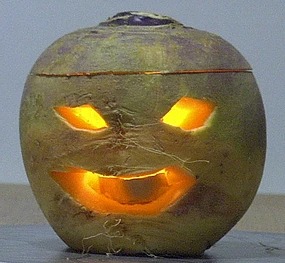 The practice of carving pumpkins on Halloween originated in Ireland during the Celtic festival of Samhain. According to legend, on Samhain night the door between the world of the living and the world of the dead was flung open and sprits and ghosts were thought to walk the earth. People would hollow out turnips to create makeshift lanterns, often carved with grotesque faces to frighten away any roaming sprits.

Originally, turnips, potatoes and beets we’re used to make the grinning lanterns. Irish immigrants brought the tradition to America, home of the pumpkin, and it became a major part of Halloween celebrations throughout the country. The name “Jack O’Lantern” comes from the old Irish legend of Stingy Jack.

The Legend of Stingy Jack

According to the legend, there was once a cruel, miserly old man named Jack. Jack was so greedy that he couldn’t bear to part with even a single coin of his precious money. One cold Samhain night, Jack found himself down at the local pub sharing drinks with a mysterious stranger. Now most people avoided mean old Jack, but this stranger was eager for company.

“I only get out this way but once a year,” said the stranger with a devious grin, “And I mean to enjoy myself!”

Well, Jack was always game for a night of drinking and devilment, but as the evening wore on he began to realize that this was no ordinary drinking partner. His curious companion was none other than the Devil himself out for his kicks on a Samhain night. Being an old scoundrel himself, Jack had no qualms making merry with Old Scratch and the two got on like a house on fire.

The evening went along well enough. That is, until the bill came. Jack so hated paying for anything that he hatched a wily little scheme to get out of it.

“So, ye says yer the Devil, do ye?” Jack mocked, “Go on with ya an’ prove it then. Turn yourself into a coin to buy our drinks.”

The Devil, unsteady from the night of carousing, laughed at the thought and with a loud POOF! turned himself into a silver coin. Jack went to pay for their drinks, but once he held that bright, shiny coin in his hand, he was just too stingy to let it go. Jack dropped the coin into his pocket next to a silver cross, which trapped the Devil in his coin form, and slipped out the back of the pub.

Out in the night, the Devil roared and demanded Jack release him. But Jack was nothing if not clever. He wouldn’t be doing the Devil any favors. Jack agreed to release the old demon on one condition. When Jack died, the Devil had to promise he wouldn’t claim his soul. The Devil was furious, but he agreed. A very smug Jack released him and the Devil sulked back into the night.

Some years later, old Jack finally died. After living such a selfish and cruel life, he was turned away from the Pearly Gates. When Jack showed up looking for quarter in hell, the Devil had his revenge.

“But I must keep my word, boyo,” The Devil said with a sanctimonious grin, “I promised I wouldn’t claim your soul and so I shan’t.”

Jack begged and pleaded with the Devil, but it was no use. He knew he had been had. As he turned to go, the Devil called to him one last time and kicked a burning ember from hell.

“A gift to light your way,” He said with wicked cackle, “Don’t say your ol’ pal never gave you anything.”

Jack put the fiery coal into an old turnip he had found, creating a make-shift lantern. With that, Jack sadly took his solitary way, doomed to wander the Earth for all eternity. From that day forward he was known as “Jack of the Lantern” or “Jack O’Lantern.”

So this year, be sure to place your own Jack O’Lantern in front of your house, or Jack and his ghoulish friends may be paying you a visit this October 31st!